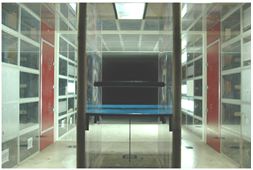 Wind tunnel test of a sectional model has becoming popular in long span bridge design processes. It is convenient to analyze the bridge deck aeroelastic behavior. The model is simple in structure, hence it can reduce the wind tunnel test cost accordingly, compare to full model. However, the model geometrical shape as well as structural dynamic properties must represent the actual bridge to be built, which is also called the prototype bridge.

Sectional model test has been widely understood as a good tool to predict the critical flutter instability as well as critical vortex induced vibration, particularly at initial deck structure development.  On the other hand, full model test is mostly performed when the engineer want to known the detail behavior of the whole bridge structure, particularly on the interaction of structural members.

In actual structure, the deck of a flexible bridge experiences several mode of oscillation. That is the excitation of its natural frequencies by external forces: life, seismic or wind load. The bridge aeroelasticity relates to wind load excitation.

Structural members can be excited by the wind. For instance, deck heaving, pylon torsion, swaying of suspension wire or other elements. The occurrence characteristics are depended on cross section of the structure, position of mounting, or wind flow characteristics. The phenomena can be catastrophic, such as flutter, or non-catastrophic such as: buffeting, galloping and vortex induced vibration (VIV). However, the non-catastrophic phenomenon contributes much to fatigue processes and discomfort of structure.

Vortex is a typical rotational flow (eddy flow) in the wake of an obstacle. The flow fluctuates in such a pattern which is known as Von Karman Vortex trails. If the frequency of vortex fluctuation coincides with one of the flexible structure natural frequency (fN), a resonance phenomenon occurs. The phenomenon is called Vortex Induced Vibration (VIV).  In case of a sectional model the oscillation could be on heaving, rolling or torsion motion.

A mathematical relation between vortex shedding fluctuation frequency (fvortex) , structure reference length (lref) and wind speed (U) is known as Strouhal formula. The formula produces a constant number for a specific structure, which is called Strouhal Number (St). The fvortex is also sometime called as Strouhal frequency (fs).

The St number is a non-dimensional number and one of the similarity parameter. It is often used to transform the wind tunnel speed of bridge model to the actual wind speed of prototype bridge. During a resonance fs = fN,  hence the St can be calculated. For flexible bridges, the value is in the range of 0.12 to 0.18. By measuring the frequency response of the model structure, the wind tunnel test could produce a relation between fs and U. In addition, the maximum oscillation during a resonance also represents the maximum displacement (Dmax) of the structure [Simiu,1996].

Flutter is the loss of system structure capability to dissipate energy which is received from the wind. The total damping is zero when a flutter occurs. The total damping consists of structural damping and aerodynamic damping. Structural damping can be obtained easily by a modal testing or free vibration analysis. However, the aerodynamic damping is something difficult to determine because it is function of geometrical shape and wind properties, particularly wind speed. Therefore, a wind tunnel test is an important means to obtain the critical wind speed of flutter.

One of the practical method to estimate the flutter speed of a structure is known as Zimmermann method. The total damping and oscillation frequency of the model are measured for each wind speed to produce an indicator parameter which is called  flutter margin (Fm). The flutter occurs when Fm equal to zero.