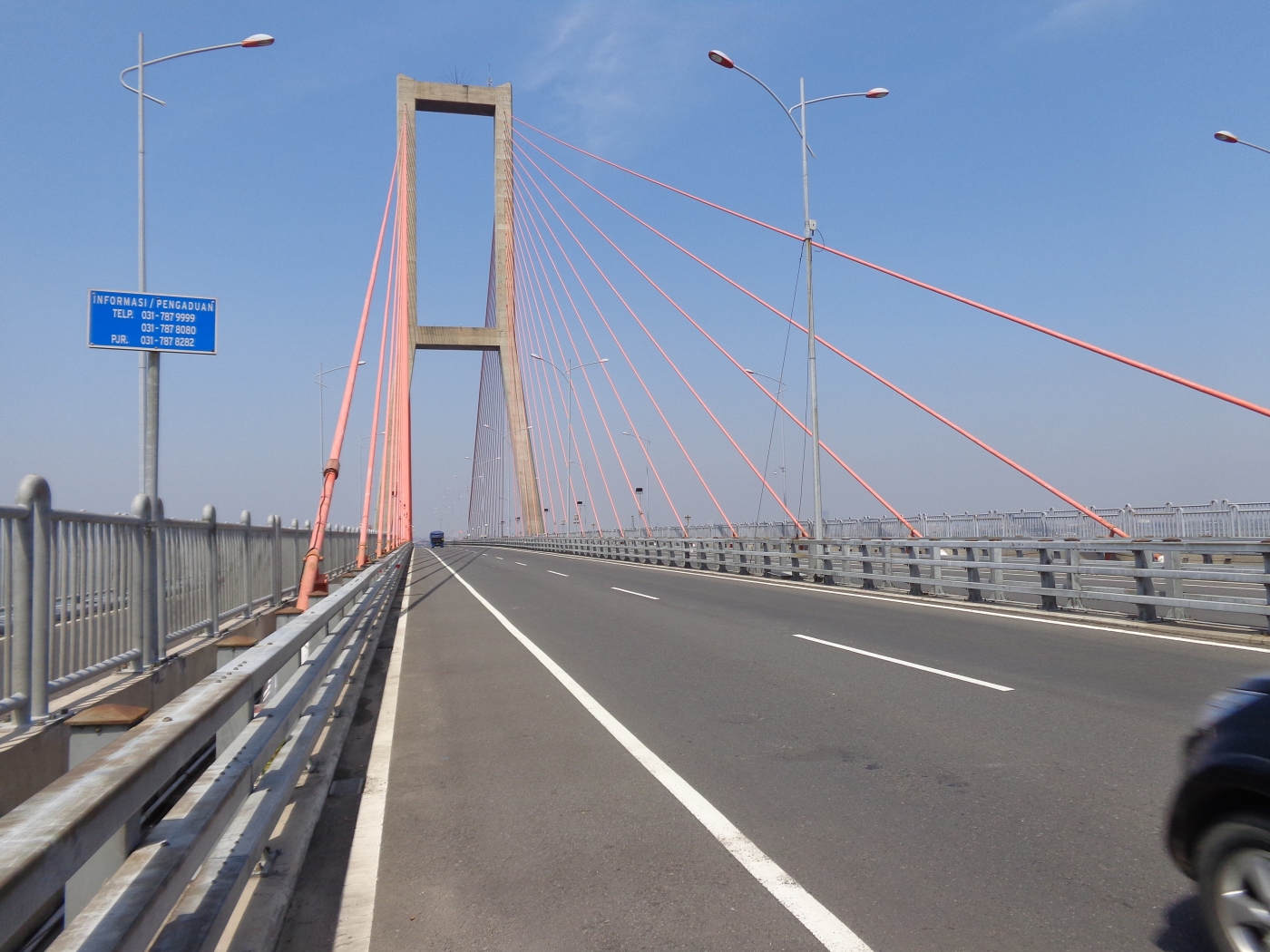 Long-span bridges are one of the most useful transportation infrastructures to strengthen national unity and to support the development of strategic areas between regions.To ensure safety and comfort for long span bridge, the important technical aspect is the bridge resistance due to wind load.  A minor error in bridge construction can impact the whole structure and its users. Some particular surveillance techniques that capable of capturing structural health of a long span bridge is needed to gain better understanding of bridge structure and acting as an early warning measure of bridge damage. Seismic, wind and traffic load can interact with the long span bridge.

Wind-induced structural vibration has received much attention in recent years. Wind tunnel testing is the popular method to predict critical velocity for wind induced vibration on the bridge at design phase.  Wind induced vibration (Aeroelastic) phenomena such as flutter and galloping can induce catastrophic failure at the structure .Displacement or excessive vibration may be excited by one or a combination of these factors. Especially for wind load, intensive study of aerodynamics in the wind tunnel is very important to ensure the safety of the system, such as wind resistance on the bridge during its service life. Although the wind tunnel test is a powerful tool to investigate the interaction between wind and a long-span bridge, it cannot simulate actual wind dynamic and structural dynamic characteristics. When the wind stream met an obstacle of bluff body form, wind flow around the object can force some vibrations. These vibrations will again interact with the flow around bluff body, causing preponderant force changes and vibration. Continuous interaction between the flow, force and vibration is called aeroelastic phenomenon. Very slim structures with low natural frequencies, accompanying with low damping, can be excited into vibrations with large amplitudes by the gust structure of the wind. At circular cross sections, the cyclic flaking of turbulences (Karman’s Vortex) can excite the structure to large amplitudes. Aerodynamic instable cross sections, such as rectangle sections can cause galloping vibrations. An extreme galloping vibration can lead to fatigue in structural connections. Bridges with cross sections, whose natural frequencies of torsion and transverse reaction lying close to each other, can be excited to flutter vibrations under certain circumstances.

Tacoma Narrow Bridge which  collapse with 18 m/s wind speed is an example of an Aeroelastic phenomenon which lead to a catastrophic effect. This flutter disaster was a trigger for many researches and studies in aeroelastic phenomenon. Nowadays, a wind tunnel study for structural aeroelastic investigation becomes a prerequisite to a long-span bridge construction. A Structural Health Monitoring System (SHMS) is also needed to guarantee safety and reliability of civil engineering structures, e.g. a long-span bridge during the complete life span in combination with maintenance actions. A part of SHMS is wind load assessment that refers to aeroelastic study.  A continuous measurement system that captures wind effect in the long-span bridge can be applied to answer all of challenges above. Wind variables consist of wind direction and speed are measured and recorded in a specific enumeration. Similarly, the vibration effects measured in acceleration values recorded in this system. The output can be used for further analysis in validation, early detection of damage, maintenance references and recommendations for the development of structures and subsequent constructions. Acceleration corresponds to wind monitoring data in aeroelastic phenomenon analysis can be done in time domain and frequency domain . Wind variables, direction and speed can be evaluated with its corresponding vibration data in time series for structural error detection or dangerous situation warning. Some upper limit value must be descripted first to deduce an error or dangerous condition. The limit value is calculated from design, wind tunnel test and first-use testing document. On the other hand, frequency domain analysis can be done for the same objective. Calculated natural frequency from monitoring data that compared with natural frequency from first-use testing document can be used for this type of analysis. One consequence of global era is sharing of data all over the word simultaneously. The same consequence affects this aeroelastic monitoring system. Perhaps, the server operator is not the only one concerned with the monitoring data, but also someone else in other place of the world at the same time. A long-span bridge as a national public transportation facility, it’s not only analyzed from engineering side but also social, economic and government policies sides. At the catastrophic situation, not only transportation or bridge engineers that are needed but also fireman, police, paramedic, and other emergency personnel.

The long-span bridge aeroelastic monitoring system prototype, BAMS x1 has been successfully built and tested at Indonesian National Long-span Bridge. Some recommendations have been compiled, such as process optimization. Data packaging, buffering and parallel processing are the main issues gaining from synchronization process. Next, transmission channel have to guarantee internet connection and bandwidth stability. Satellite Link or 4G network upgrade can resolve this problem. Also downgrading to TCP/IP socket could be considered to create a more efficient data transmission process. Applying generic and open-source web builder is also an alternative, as oppose to LabVIEW non generic/proprietary web builder. Parallel processing is the most noted recommendation both for client and server side. Applying multithreaded processes is a must in a recent server to improve inter-process relationship. It guarantees minimum interference from data receiving to database saving process, which at the moment can cause data overflow.

“I came to realize that exaggerated concern about what others are doing can be foolish. It can paralyze effort, and stifle a good idea. One finds that in the history of science almost every problem has been worked out by someone else. This should not discourage anyone from pursuing his own path” – Theodore von Kármán